I am partial to milk chocolate with high cocoa content. It combines the best of both worlds: the rich flavor of dark chocolate, and the smoothness of milk chocolate. The better grades will be made of cocoa coming from a single region, ideally Venezuelan criollo. The natural candidate would be El Rey, a Venezuelan maker, but I don’t like the milky aftertaste of their Caoba 41% cocoa bar. My favorite, Michel Cluizel, makes superlative bars with 50% cocoa content, but the cocoa is from Java or Madagascar. They even used to have a 60% bar blended with almond cream, unfortunately it seems to have been discontinued.

A new specialty chocolate store, Bittersweet Cafe, opened recently on Fillmore Street in san Francisco. They have a good selection, almost as good as Fog City News, with some brands I haven’t seen before. One of those was this bar made from Venezuelan Chuao criollo beans, with a mix of chopped almonds, hazelnuts, and interestingly, pistachios. It is made by Chuao Chocolatier, a small artisanal company based in San Diego (but we won’t hold their unfortunate choice of location against them).

The bar has a rich, deep flavor, and is not over-sweetened as is unfortunately too often the case with milk chocolates. The cocoa content is not indicated, but I would estimate it at around 40%. The nuts are crunchy and fresh, with no hint of rancidity. This is no small feat, hazelnuts and pistachios spoil easily and are tricky to work with. Fran’s, based in Seattle, won’t even ship some of their Oregon hazelnut confections outside Washington State out of fear they will lose their freshness by the time they arrive. At $6.50 ($6 if you buy direct in packs of 4), this is by no means cheap, but at least they give you an unusual 110 gram portion, none of that wimpy 75 gram size companies like Scharffen-Berger (now a part of the despicable Hershey group) are turning to in order to increase profits.

Merry Christmas to all, hopefully one rich in cacao…

They changed the packaging and name. It is now called the “Milk chocolate nut nirvana”.

I live in San Francisco’s Nob Hill. Nob is a contraction of Nabob, itself a corruption of the Urdu word Nawab, meaning the governor of a province in the Mughal empire. Of course, many locals call it Snob Hill, even though many bourgeois-bohemian neighborhoods like the nearby Russian Hill or Telegraph Hill are in reality far more exclusive, but this is where the big four robber barons of nineteenth century California, Crocker, Huntington, Stanford and Hopkins built their palaces.

I live just across Grace Cathedral, former location of the Crocker spite fence, which gives a good illustration of the robber barons’ arrogant contempt for the law or common decency. They monopolized energy and the vital railroads that transported agricultural produce to the principal markets in the East Coast, and bled farmers white with high fares, with the complicity of venal politicians. The populist backlash around the turn of the century led to the initiative system that features so prominently in California politics, and renders it to a large extent ungovernable.

The nabobs have left, and their mansions have been converted into fancy hotels, public parks or a cathedral. Despite the hotels, Nob Hill had a reputation for being a gastronomic wasteland, specially when compared with Polk Gulch and Russian Hill, but that has changed dramatically in the four years I have been living here.

Last week, I went to Rue Saint Jacques, a new French restaurant that opened a mere seven weeks ago. I once lived at 123 rue Saint Jacques in Paris, when staying in a dorm at the Lycée Louis-le-Grand, so I got a kick from the name. It is apparently named after a tony restaurant in London where the chef once worked. The starter course, a salmon tartare on a bed of Belgian endives was somewhat lackluster, but the next course, a filet of beef in a foie gras sauce, was absolutely heavenly, as was the nougat glacé, a sort of ice cream studded with candied fruit and nuts to resemble Montélimar nougat.

Another restaurant that opened its doors recently is C&L, a steakhouse which replaced the Charles Nob Hill restaurant. You could be excused for thinking this place does not want your business — the only sign of their presence is a very discreet brass plaque on a residential building. Charles Nob Hill had a good French nouvelle cuisine style menu, but unsurprisingly marred with affectation and not offering great value for money. These defects have been mostly addressed in the new restaurant, which has the same owners and is managed by the same staff.

The canonical steakhouse in San Francisco is Harris, but C&L does not compete with it head-on. The waitstaff is far more friendly, for starters, and the preparations are more refined as well. This is not to ding Harris, which is a very solid, if traditional and conservative steakhouse, regularly featured among the top ten in the nation — Harris’ filet mignon Rossini is a must-experience for meat lovers. That said, C&L’s menu is more innovative, albeit with smaller portions. I had their tangy mussel soup, followed with their “pot pie”, a chunky steak served with glazed vegetables in a copper pan lined with dough and cooked in an oven, at once relatively light and bursting with flavor. I cannot vouch for their desserts as in the two times I have been there, I did not have enough appetite left, which is saying something, as I am somewhat of a dessertarian.

Nob Hill is also home to two restaurants that offer surprisingly good value, at least by San Francisco standards. Watergate is a French restaurant with an Asian accent, e.g. traditional French preparations like duck magret in truffle sauce, paired with exotic vegetables like Bok Choy, or their warm lobster martini with jasmine pearl sauce, a perennial favorite. I am not overly fond of “fusion” cuisine as it is often a lazy attempt to thrill jaded palates, at the expense of authenticity or the internal coherency of a culinary tradition. Watergate avoids this trap – their menu is original but impeccably executed in the best of French tradition, which strives for quality ingredients and balanced preparations that emphasize rather than overwhelm delicate flavors with too many spices.

The other bang-for-the-buck restaurant is Rue Lepic, which is the opposite of Watergate in that it is a scrupulously classical French restaurant run by a Japanese chef. They offer an excellent five-course menu for $38 that would pass muster with the crustiest of French traditionalists.

The dukes of Praslin-Choiseul stem from one of the most illustrious noble families in France, but they are best known because one of their pastry chefs invented the confection known as praliné in honor of his patron. Brillat-Savarin famously wrote “the invention of a new dish does more for the happiness of mankind than the discovery of a new star”. Apparently it does wonders for a family’s name recognition as well.

Praliné is basically a blend of finely ground hazelnuts and almonds and cooked with boiling sugar (otherwise, it would just be another form of marzipan). If it is mixed with chocolate, it becoms gianduja. If the nut fragments remain discernable in a matrix of caramelized sugar, the result is nougatine, one of the heights of French pastry-making. One interesting variety is feuilleté praliné, where the praliné is blended with pieces of extremely fine and crisp wafers to yield a confection that has at once the smoothness of praliné and the crispiness of a flaky pastry. When I was a kid, I would often buy “Lutti Noisettor”, a hard hazelnut-flavored candy where the core had this same stratified laminated and crunchy texture, but it seems it has been discontinued, perhaps the fabrication technique was too complex to be profitable.

Michael Recchiuti is a chocolatier who moved to the San Francisco about a decade ago to start his confectionery business with his wife Jacky. He has a boutique in the Ferry Building food court and a number of the better groceries in the city carry his products. A small operation like his cannot make its own chocolate couverture, and it appears he relies on Guittard, another reputable San Francisco company. In addition to his lovely chocolate bouchées, Recchiuti makes a line of chocolate tablets. 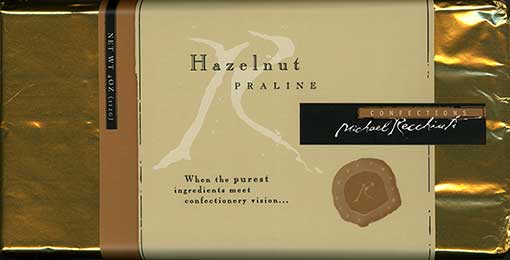 My favorite one is the Hazelnut Praline, which is actually a feuilleté praliné. A safety disclaimer ought to be mandatory on the wrapper, as biting into a piece is an amazingly intense experience. The couverture is excellent, but it is the praliné that grabs your attention: rich, dark, clearly made with a high proprtion of nuts to sugar and blended with dark rather than milk chocolate, and with the delightful crispy texture of feuilletine. Everyone I gave a taste of this bar had the same reaction of utter amazement, it is that good. 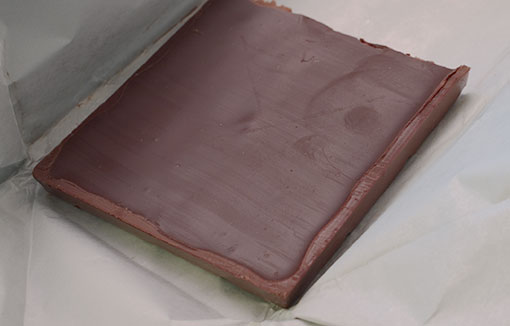 The chocolate bar is clearly made by hand, as you can see from the irregular shape on the other side of the mold. This is unfortunate in a way, as it means distribution will remain limited for the foreseeable future. I have worked it into my standard tour of San Francisco for visiting friends and relatives, as they are unlikely to experience it elsewhere.

All good things come to pass, and this product has been discontinued. The other Recchuti bars seem uninspiring.

The world’s best chocolate comes from the criollo variety of Venezuela, renowned for its complex and subtle flavor. Unfortunately, this variety, the original and purest variant of cacao, is fragile and has poor yields, making it expensive to produce. That’s why bars like Amedei Porcelana sell for more than $10 per tablet.

Fortunately, there are inexpensive alternatives. For those who live near that great South California institution, Trader Joe’s, run, don’t walk, to stock up on Chocovic Ocumare, which retails for a mere $1.79 a bar. Chocovic is based in Barcelona, and has a line of single-origin Southern American chocolates named in honor of their places of origin (Ocumare is a coastal cacao-growing district of Aragua state in Venezuela). Few people immediately associate Spain with chocolate, but the Spaniards are the ones who first imported the cocoa bean to Europe, and Spain obviously maintains a close relationship with Latin American nations which produce the best cacao (unlike the more industrial but lower grade stuff that comes from Ghana/Ivory Coast and South-East Asia).

As with all criollos, the Ocumare is relatively mild but has a very rich taste that lingers in the mouth. It may seem like sacrilege to use it for cooking, but when made into a ganache and poured as a frosting over a cake, it is simply phenomenal. Just make sure the cake in question is exceptional enough to deserve this truly regal treatment…