Two years after the Staceycide, the spot is still vacant. At a reported rent of $65,000 a month, that adds up to a cool $1.8M loss for the greedy landlords who pushed them out of business. 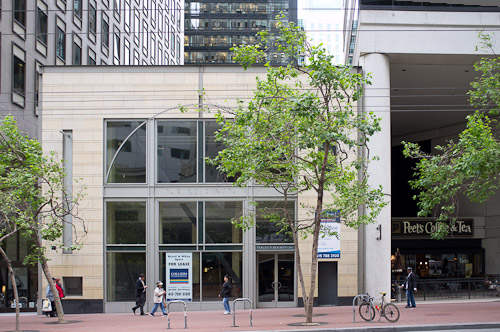 It seems they finally found a new tenant: a CVS pharmacy occupies the premises now.

After a brief period of 100% digital shooting in 1999–2001, I went back to primarily shooting with film, both black & white and color slides. I process my B&W film at home but my apartment is too small for a darkroom to make prints, not do I have a room dark enough, so I rent time at a shared darkroom. I used to go to the Focus Gallery in Russian Hill, but when I called to book a slot about a month ago, the owner informed me he was shutting down his darkroom rental business and relocating. He did recommend a suitable replacement, which actually has nicer, brand new facilities, albeit in not as nice a neighborhood. Learning new equipment and procedures was still an annoyance

Color is much harder than B&W, and requires toxic chemicals. I shoot slides, which use the E-6 process, not the C-41 process for more common color negative film. For the last five years, I have been going to ChromeWorks, a Mom-and-Pop lab on Bryant Street, San Francisco’s closest equivalent to New York’s photo district. The only thing they did was E-6 film processing, and they did it exceedingly well, with superlative customer service and quite reasonable rates. When I went there today to hand them a roll for processing, I discovered they closed down two months ago, apparently a mere week after I last went there.

I ended up giving my roll to the NewLab, another pro lab a few blocks away, which is apparently the last E-6 lab in San Francisco (I had used their services before for color negative film, which I almost never use apart from the excellent Fuji Natura 1600).

Needless to say, these developments are not encouraging for a film enthusiast.

There is at least one other E-6 lab in San Francisco, Fotodepo (1063 Market @ 7th). They cater mostly to Academy of Arts students and are not a pro lab by any means (I have never seen a more cluttered and untidy lab). In and in any case they are more expensive than the New Lab, if more conveniently located.

The Newlab itself closed as well few months ago. I now use Light Waves instead.