I live 1.2km away from Sutro Tower in San Francisco. At my wife’s request I was trying to calculate the safe radius at which emissions from the transmitters at Sutro Tower are of the same power as a cell phone held a meter away, with back-of-the-envelope calculations using the inverse square law and Wikipedia’s table of radio powers.

I was shocked to find out the total power from the transmitters is about 8 megawatts, not in the kilowatt range I was expecting, and once reached 29MW. For comparison, the power of France’s first-generation PWR nuclear reactors is 900MW, and a typical cellular tower is 100W to 500W. If I use 2W as the reference, this yields a “safe” radius of 2km, which excludes many desirable San Francisco neighborhoods like Twin Peaks, Forest Hill or Noe Valley (click on the map to expand). 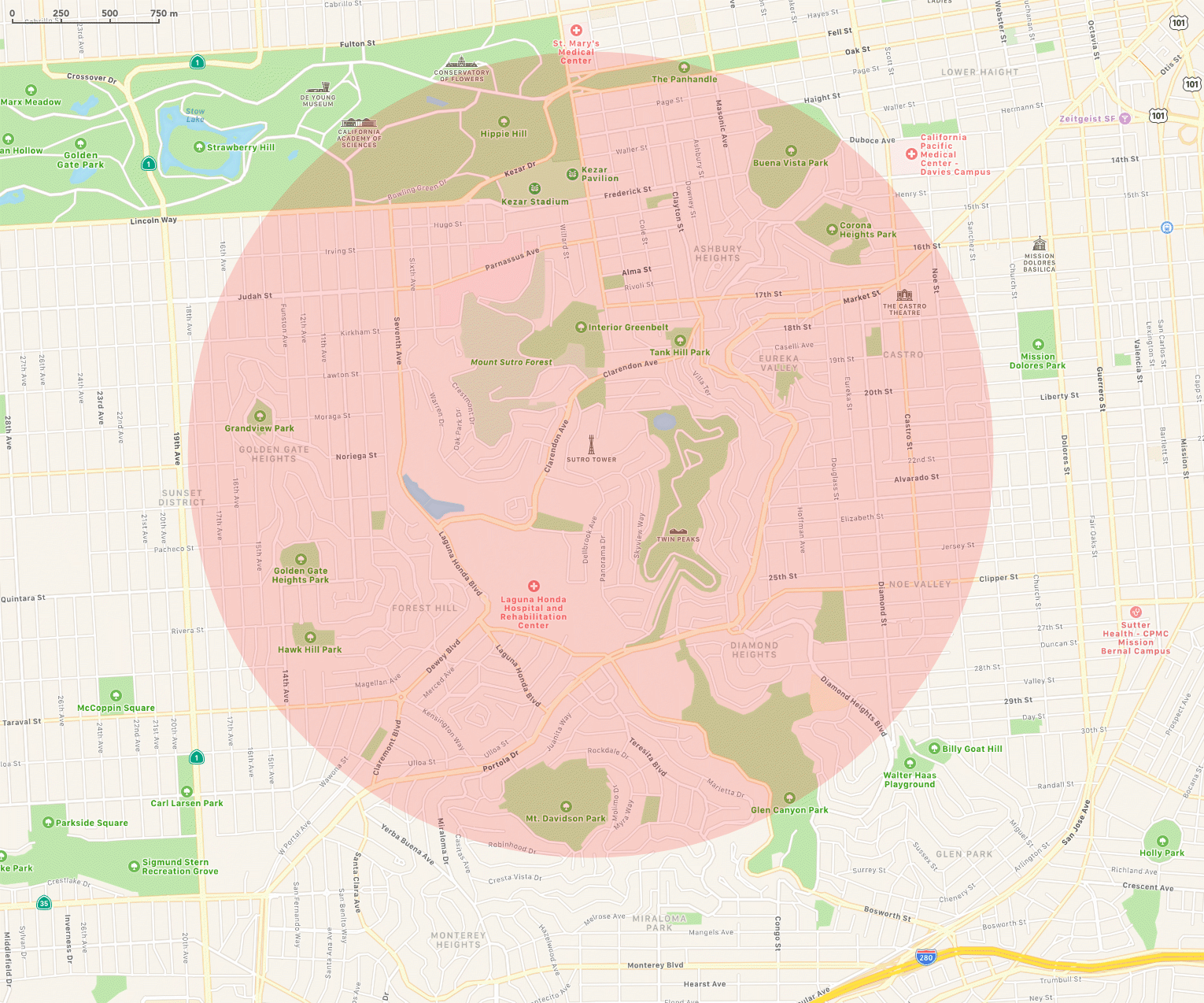 I looked up the most recent Environmental Impact Report following the DTV transition, and it mentions a FCC maximum allowed flux level of 0.2mW/cm2, and the measured levels in the Midtown Terrace neighborhood immediately adjacent to Sutro Tower reach 4% of this max level.

On further investigation, this is not one of those situations where US standards are significantly more lax than those in Europe, as France or the UK have the same level, derived from an international NGO called the ICNIRP. Interestingly, according to the WHO the maximum allowed emissions in such environmental paragons as Russia and China are one hundredth as high as those in the US or Europe and are just as science-based as those from ICNIRP (remember, for all its faults, the Soviet Union ranked very highly in maths and physics education & research, and in health care).

The ICNIRP/FCC standard is equivalent to a 25W isotropic emitter within a 1 meter radius, or 12x 2G GSM cell phones. Anyone who has experienced the squeal of unshielded and unpowered speakers next to an actively transmitting GSM phone will be skeptical about their claims that this is a safe level. Their methodology is based solely on the thermal effects of non-ionizing radiation, as if this were a mere microwave oven shielding exercise, and assumes that cells are otherwise unaffected by electromagnetism or cumulative exposure. This seems unwarrantedly optimistic.

People worry about cancer risks associated with radio frequency emissions from cell phone towers and cell phones themselves, but the real risk comes from overlooked obsolete technologies like TV and FM radio.

What to do? Getting a site survey from a Professional Engineer using calibrated equipment costs $1,500, which is something you would only do as part of a final inspection while buying a house. Most RF power meters sold on places like Amazon, usually in the $300 range, are pieces of junk with suggested applications like detecting paranormal activity and ghosts. Most likely solid engineering and metrology are optional given their application domain. Professional T&M gear like an Agilent V3500A or a Wandel & Goltermann/Narda EMR-300 cost $2,000 and $6,000 respectively, so the DIY route is also expensive.

My father worked on some projects in the Soviet Union in the Seventies. He told me their workplace safety standards were much more stringent than the ones in the West. Workers were not allowed to lift weights above 25kg, for instance.

We moved to a house across from Parkside Square (in the lower left corner of the map), well beyond the 2km limit.