Last Saturday, I became the proud owner of a Leica M8. Then, a not-so-proud owner. As of yesterday, an ex-owner…

I returned it and sprung for an Epson R-D1 instead, saving almost 50% in the process. I had already previewed one at MacWorld SF two years ago. 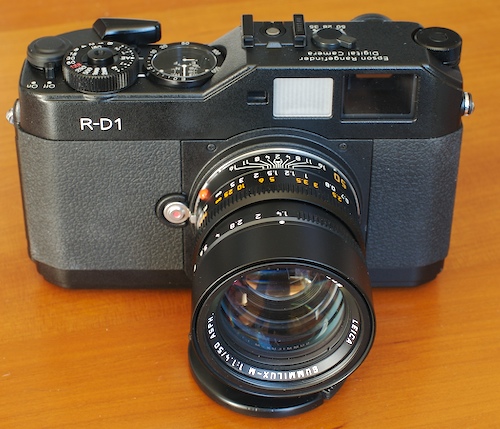 Most people interested in a M8 know by now about its problems with sensitivity to near infrared, which manifests itself as a magenta cast in certain situations. There is a work-around (buy costly Heliopan or B+W IR filters for your lenses, although there are rumors Leica will provide two free filters), but many are legitimately angry at Leica for having rushed the M8 launch despite such a fairly obvious flaw. It’s not an ideal situation but I could deal with it, as long as Leica stood behind its product and committed to a free upgrade to the corrected model once a definitive fix becomes available.

The straw that broke this particular camel’s back was quality control, however, or the lack thereof. My M8 exhibited almost an entire column of dead pixels (the bottom 3/4 at x=2888). If you must, see this jpeg or the original DNG. This kind of flaw would be unacceptable in a sub-$1000 Canon or Nikon, it is simply outrageous in a camera as expensive as the M8.

The magenta cast is not an edge condition visible in limited conditions, by the way (Leica claims it only affects black synthetics under tungsten light), the photos I took last Sunday indoors in available light are completely unsalvageable, with a strong magenta cast everywhere that cannot be corrected by any amount of custom white balancing. Here is an example: JPEG, DNG.

Last, but not least, noise levels are excessive at ISO 1250, let alone 2500, with smearing in rows where bright highlights are present. Essentially, this camera as it stands today is utterly useless outside broad daylight conditions (I don’t have an IR filter, so I can’t comment on how effective they are). Of course, pretty much all cameras do reasonably well in daylight, even cheap and nasty point-and-shoots with too many megapixels crammed in a sensor too small. Rangefinders give you a two stop advantage due to the absence of mirror slap, but even with a Noctilux, the M8 has no edge over a Canon DSLR because of the noisy sensor. Then again, it is one of my rules of photographic thumb that Kodak stands for poor quality, and since they make the sensor in the M8, I should have expected the worst.

It’s interesting to note how the reviews published so far managed not to mention any of these problems, which are completely obvious, even with the most cursory of inspections. In at least one case (Michael Reichmann of The Luminous Landscape), the reviewer found out about the IR issue, informed Leica about it but neglected to mention it in the review. This confirms me in my belief Phil Askey’s reviews at DPReview are the only reliable online reviews of digital cameras.

Leicaphiles seem to be mostly in denial, or minimize the extent of the problem. I am as big a fan as any of Leica’s optics and their rangefinder cameras, but the flaws in my M8 were so glaring I can’t even begin to fathom the levels of cognitive dissonance required to sustain a positive opinion of this train wreck in the making.

All the reviews I have read so far have been raising hallelujahs and claiming the M8 feels like a real Leica M. It most certainly does not: 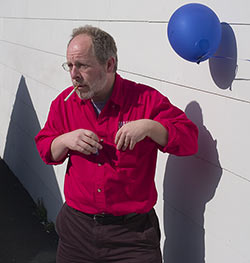 After using the R-D1 for a few hours, the superiority of the design over the M8 is readily apparent (with the sole exception of the taller body and short rangefinder base length):

One bright light in this fiasco: Doug Thacker at Calumet Photo San Francisco (above) went well above the call of duty to help me with my purchases, all with unfailing good humor (he once sent me an email at 11PM to let me know of the IR sensitivity problem before they started receiving theirs). He even set one M8 aside for me even though I had cancelled my initial pre-order (they are in short supply and are reportedly going for over $6000 on eBay right now, so the opportunity costs are considerable). I think I will switch from B&H to Calumet for the bulk of my photo purchases in the future.

I must be a glutton for punishment, as after reading Phil Askey’s M8 review, remarkably thorough as usual, I decided to give it another chance and get one for my birthday. The first one I ordered (from Amazon) had a severely misaligned rangefinder – points at infinity would not coincide at all when the lens was at infinity focus. It had a low serial number, suggesting an early model with teething problems. Presumably Amazon does not sell that many, so I returned it and ordered another one from a place with much higher turnover, B&H. That one was a recent vintage (they have an orange sticker on the body cap), but its rangefinder was also misaligned, if not as severely.

In frustration, I went to my local Calumet and finally found one that focuses correctly. Wonder of wonders, it even seems like there are no dead pixels or highlight streaks. Conclusion: Leica’s M8 quality control is still spotty, your best bet is to buy locally and test the rangefinder in the store itself.