I just received my Canon Powershot Zoom yesterday. It’s a relatively compact digital camera shaped like a monocular. Size-wise, it is comparable with monoculars like my Leica Monovid or Nikon 7x15 HG. 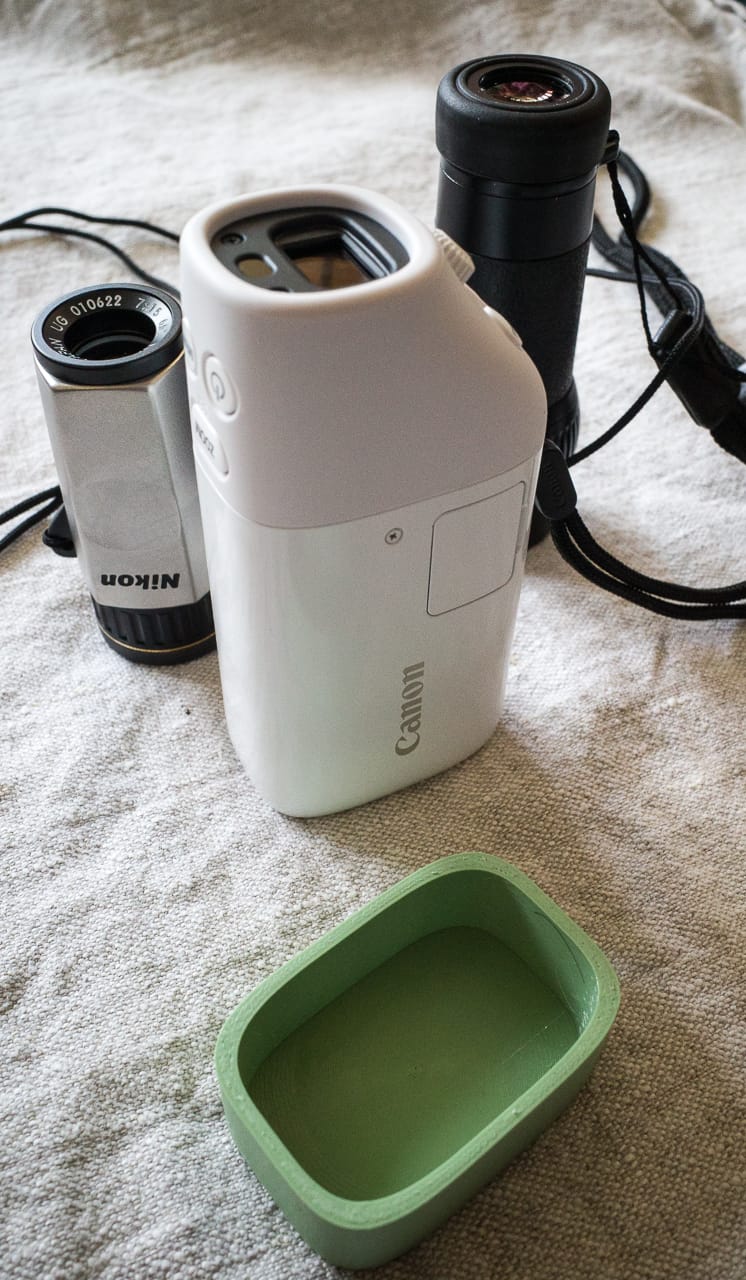 It’s not actually a zoom, but rather it offers 100mm-e and 400mm-e discrete magnifications (with nothing in-between), and a 800mm-e digital zoom setting that is best ignored. It will take 4000x3000 images or 1080p25 (if set to PAL) at 30Mbps. There is no built-in memory, you have to use a microSDXC card, in my case a 64GB one, there is no specified upper limit.

On paper it looks like an ideal birdwatcher’s camera, since the 400mm-e is roughly the same magnification as a pair of 8x magnification binoculars, but Canon’s specifications list it as 4.8x (and 9.6x for the digital zoom, which is closer to 8x as seen through my Swarovski NL Pure 8x42 binoculars). This suggests the EVF is a 60% magnification type. The actual focal length is 55.5mm on a 1/3" type sensor (actually the center of a 1/2.3" sensor) with a diagonal of 8.467mm, which compared to the 40mm diagonal of a 24x32mm 4:3 crop of a 24x36mm full frame would be 262mm-e or 5.24x magnification, not 400mm-e, so Canon’s specs are somewhat dubious, unless the equivalence is calculated from the 1/2.3" sensor size, but then why throw away those pixels?

That said, the 2.36 Mdot EVF resolution (so 0.8 MP, or basically 1024x768) is not on par with quality birdwatching optics and the field of view is tunnel-like. A 62cm ruler fills the horizontal width at 7.26m at the 400mm setting, so 85m at 1000m, thus 4.9º real horizontal field of view1 And using the 4.8x magnification quoted by Canon, about 23º apparent field of view2, which is abysmal. In comparison the Nikon 5x15 HG monoculars have a 43º AFOV , and full-size binoculars are considered mediocre if they don’t get at least 55º, and that understates the case since the field of view is a 4:3 rectangle, not a circle, so only 61% the AFOV3. Furthermore, the EVF is prone to blown highlights or muddy shadows in scenes with wide dynamic range. Eye relief for glasses is fine, and there is a tiny wheel for diopter adjustment. This gadget will not replace real optics anytime soon.

The image stabilization is a 4-axis lens-shift type, and quite effective while viewing, slightly less so for video.

The user interface is very basic given the few buttons available. I think the prominent zoom button on top would be better used as the photo-taking button, vs. the smaller and more fiddly one at the bottom. It would also be nice for the camera to remember the previous magnification setting rather than defaulting to 100mm-e every time it is powered on. There is a smartphone app that allows image transfer over WiFi and geotagging using the phone’s GPS, but I haven’t tested that functionality.

With a sensor that puny, you can’t expect amazing results. At night, the image quality falls apart. In the daytime, it has to crank up the ISO to have sufficient shutter speed to avoid motion blur, even with stabilization, aiming at 1/500 shutter speed when at the 400mm-e setting.

Inexplicably, Canon did not include a lens caps to protect the objective lens, so I designed and 3D-printed my own (the OpenSCAD source is here and gcode for Prusa i3 MK3S here). It would be much harder to make a lens cap for the eyepiece, but that’s less critical as it has no bearing on picture quality.